How to Cook a Moose

An award-winning novelist’s account of the unexpected fulfillment she found in New England, living, loving, cooking, and eating “at the end of the world.”

In this exuberant, unabashedly gourmand-esque follow-up to Blue Plate Special, Christensen celebrates the land, food, and people of Maine. The state became her home after she and her partner, Brendan, decided to leave a beloved New Hampshire farmhouse owned by the Fitzgerald family and buy a house of their own. They settled in the quietly cosmopolitan city of Portland, where they discovered restaurants that, in their excellence and diversity, rivaled those in larger cities like New York. As she got to know actual Mainers, Christensen also found herself appreciating their unpretentiousness and rugged individualism, and she admired their “quiet work ethic…that is somehow never puritanical or self-righteous, as well as the lack of judgment, the mind-your-own-business attitude, and the fierce pride of place.” This was especially true where food was concerned. Despite the state’s short growing seasons and long winters, Mainers took pride in keeping their food—whether from the land or sea—local and in season. Christensen’s interest in her new home and, in particular, its cooking traditions led her to explore Maine history and learn the personal stories of the chefs, fishermen, hunters, and farmers who wrested plenty from the rocky soil and fierce ocean. Her enthusiasm for her adopted home and its ethos of sustainability is as abundant as the lovingly crafted descriptions of stunning landscapes and mouthwatering meals—the recipes for which Christensen includes in the book—she and her partner prepared together in their kitchen. The heartbreak and personal drama that characterized Blue Plate Special is absent in this book. Christensen is eating well, in love, and radiating the “quiet internal daily joy of living in a culture based on authenticity and integrity.”

Winner of the 2016 Maine Literary Award for Memoir 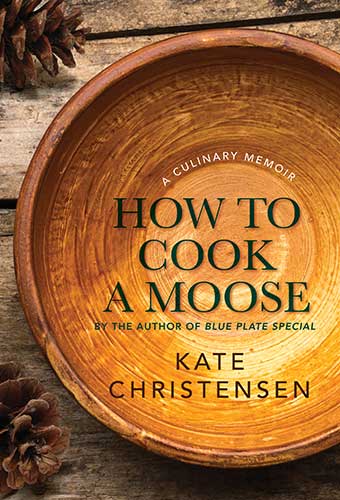 Read an excerpt from the book

Pre-order the hardcover from Amazon

Bushnell on Books: ‘How to Cook a Moose’ and ‘Truth Beat’ (CentralMaine.com)

Keeping the Wolf At Bay: The Hunger for a Better Food System (Los Angeles Review of Books)

HOW TO COOK A MOOSE (Kirkus Reviews)

Review: ‘How to Cook a Moose’ by Kate Christensen (Chicago Tribune)

Lundgren’s Lounge: “How to Cook a Moose,” by Kate Christensen (Bill and Dave’s Cocktail Hour)

Review: ‘How to Cook a Moose,’ by Kate Christensen (Star Tribune)

Excerpt: ‘How to Cook a Moose’ (Boston Globe)

How to Cook a Moose is as lush, lean, and hardy as the region that inspired it. I devoured every word of  this beautifully written book.

How to Cook a Moose is part of a long proud literary tradition that asks: Why do we Americans feel the need to start over? How do we do it? And with whom? And where? Christensen is one of our best, most versatile writers, and her latest is a terrifically smart, funny, disarming story about how we get where we’re meant to go, and what we might eat when we get there.

author of 'The Happiest People in the World'

How to Cook a Moose is Kate Christensen’s gorgeously composed love letter to Maine, its people, and its food. Like Maine itself, it is both cozy and rugged, grounded in a powerful sense of place. One of our finest novelists is one of our best memoirists and food writers, too.

author of 'Drinking with Men'